Moscow Poly ‘Manta Ray’ sailing regatta team have tested out a boat running on ‘Valentina Queen’ solar batteries.
On 14 May, Saturday, the first in this season float-out and test drive of the “Valentina Queen” boat, that was built in 2018, took place. Despite of the changeable weather in Moscow, the team have successfully achieved their goals. The test out was held in Izmailovo. 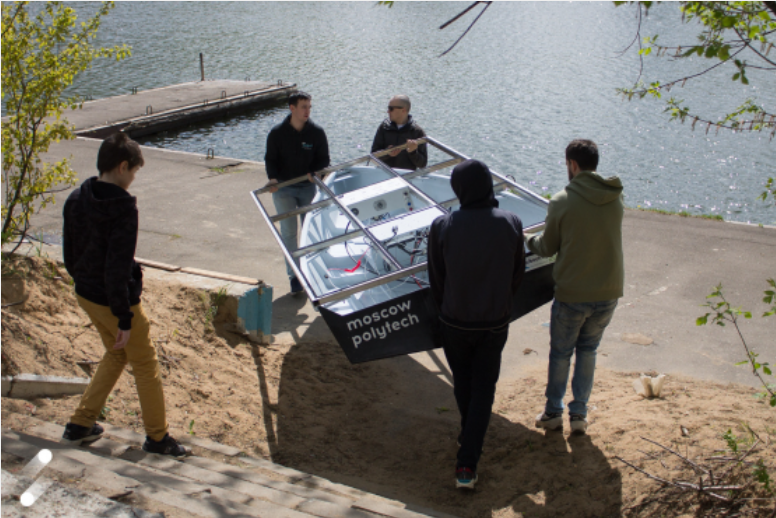 The team tested working capacity of all systems and measured the motor power at different speeds – that was necessary the produce two submersive power units fitting the characteristics.
For new students – team members there was a rite of passage. In addition, a new control unit – carbon steering wheel has also passed the rite this weekend. It was built based on the model developed by the team and made of innovation materials, such as sinterma and carbon fiber and thus, is 15 times lighter than the previous one.


According to Moscow Poly teacher, team coach, Valentina Kaplina, the freshmen have only joined the project in February but have already made contributions.
“Before that, they have only seen a boat when it`s under polishing machine, and now they have had a chance to get a hold of driving a boat/ to feel what it`s like to be driving a boat. Our project unites students from various faculties but we are doing our best to provide them with work within their own field area. For example, Information Technologies faculty students are engaged activities related to on-board boat computer and telemetry. The computer [monitor] translates all data on electrical systems current state, whereas telemetry allows to control these characteristics on-shore”, - shared Valentina Kaplina.


Currently, the team is in the middle of preparing for producing the body of the boat of new materials. All previous boats were made of laminboard, laminated carbon fiber and laminated glass fiber fabrics. The next boat will be constructed by vacuum infusion using no laminboard. That means students studying material science will acquire experience handling different materials including composite ones.